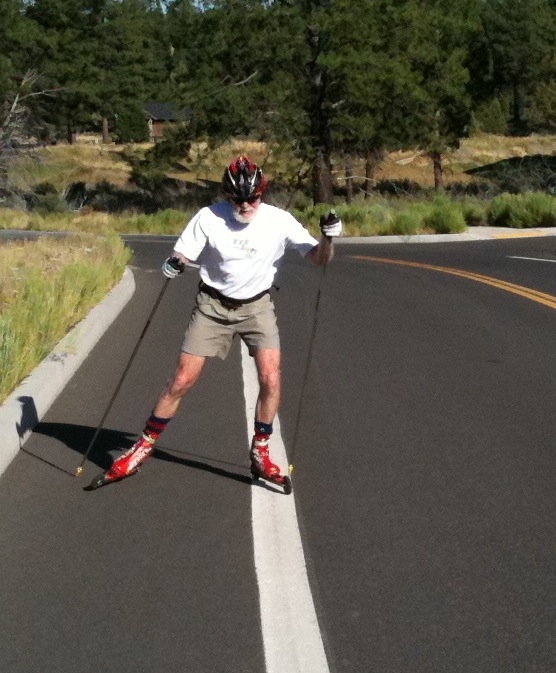 Rollerskiing is essentially a training method for skilled cross-country skiers. The technique and motions used are identical to on-snow technique, making rollerskiing the best way to prepare for the coming snow season. Rollerskis are mounted with standard cross country ski bindings using standard boots as well.

The poles are also the same as what is used on snow, yet they are equipped with a rollerski ferrule. Rollerski ferrules are tips made of harder carbide (a metal alloy), which is reinforced by stronger plastic to prevent the tip from breaking off. We carry the Swix Rollerski Ferrules for $20. Skiers will use the same pole lengths as well. A rollerski does put the skier higher off the ground than they would be on snow, but the poles do not sink into the road's surface--making their effective length the same.

All elite-level cross-country skiers, biathletes, and Nordic combined skiers use rollerskiing as an integral part of their off-season training, and a steadily growing number of recreational skiers are finding that rollerskiing can be a fun way to stay in shape and improve their overall fitness. We do not encourage people who have not cross-country skied before to purchase rollerskis, since it is a somewhat dangerous activity and requires a certain level of technique proficiency.

PRO-SKI manufactures six different models of rollerskis, some of which come with or without speed reducers. Generally, these skis can be divided into two categories: classic technique and skate specific. The classic technique skis are made with wider rubber wheels which tend to be more stable than most skate-specific skis. They also have slightly longer shafts which, combined with the more-forgiving rubber wheel, give these models a comfortable ride which closely resembles the on-snow feel of skis. Classic rollerskis have one wheel that contains a one-way needle bearing. This provides the "kick" for classic striding technique. Because classic skis use rubber wheels, these models are also available with an optional Speed Reducer. Speed reducers not only offer the obvious safety benefits of controlling the speed of the skis on a downhill, but they can also add smaller amount of resistance for skiers looking for slightly harder workouts or for those who would like to adjust the speed of their skis so that they may ski with other skiers at the same pace.

Skate-specific rollerskis are designed to be used for skate technique skiing. The wheel material is either a polyurethane or a harder rubber compound, and the wheels are noticeably narrower than those on dual technique skis. Skate-specific rollerskis are a must for serious skiers looking to have the most realistic simulation of skate skiing, but we tend to recommend classic rollerskis to beginning rollerskiers. This may sound odd since many skiers do most if not all of their snow skiing with the skating technique. Yet please consider the following points:

The most important thing to remember when rollerskiing is to ski safely. There are inherent risks involved with rollerskiing, but you can do your best to minimize them. As similar as rollerskiing is to snow skiing, there is one glaring difference: asphalt is nowhere near as forgiving as snow. Because of this, you'll need to take some precautions. These are some tips to keep in mind out on the road: 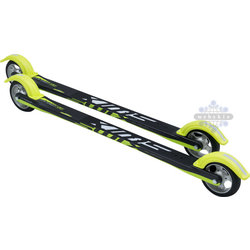 Many masters skiers jeopardize their season preparations by not doing rollerskiing, and this is a big mistake. One reason might be that many of you became discouraged when you tried rollerskiing 15-20 years ago when the rollerskis were heavy and difficult to handle. Today’s rollerskis, however, are lightweight, smooth and fun. Without the specific nature of rollerskiing, a skier’s body simply cannot be adequately prepared for the demands of ski racing. Once on snow, skiers who haven’t trained on rollerskis will notice that their arms fatigue faster, their backs will ache quickly in a long double-pole or diagonal section, and their abdominal muscles will lack the strength to get the necessary compression for good technique. Those who have trained on rollerskis, on the other hand, will see great improvements in technique and fitness--and their race results will show it.

There are a number of ways in which rollerskiing can add to a training plan. The most obvious is by using rollerskis for distance workouts, which enables a skier to simultaneously train all the muscles he or she uses while skiing--because he or she is skiing. Your first rollerski workout of the season should be in an empty parking lot or similar area without cars. Work on stopping, starting, skiing circles and changing directions while looking around for imaginary cars. After a couple workouts like this you will be ready for distance training. Let the first 3-4 distance workouts be 30-40 minutes long, and gradually increase the length and effort of these sessions as the ski season gets closer.

Rollerskis can also be used for strength training by using a slight uphill and doing repeats of double-poling and single-poling up the hill, or by doing skating on rollerskis without poles. Once a skier has developed efficient technique and is comfortable on rollerskis at higher speeds, tremendous progress can be made by doing intensity work on rollerskis. Since the focus was on increasing speed, race lengths have been fairly short: from one to five kilometers. Not only was the racing fun, but we have also seen great improvements in speed, power and racing skills--such as finding the right speed early and be able to hold it throughout the entire race. So team up with some friends and make up your own "Rollerski Cup".

Just a reminder before you start: SAFETY FIRST - WEAR A HELMET AND BRIGHT CLOTHING, and don’t be so excited that you forget to watch for cars. And finally - always switch from skating to slow double-poling when cars are approaching.

Which Rollerski Model to Choose?

There is no one perfect rollerski. We offer a number of different models so that each individual can meet their own needs. Most top skiers have at least 2-3 pairs of rollerskis and most serious Master skiers have two pairs - one classic, one skate.

Rolling resistance, physical adaptation to training, development of proper technique and improvement in results were evaluated by Norwegian and Swedish National Team coaches to help them select the best rollerskis for their athletes. We have used their evaluations, as well as years of experience from our own testers to make our recommendations.

We recommend that people who have never rollerskied before start with a classic model. These skis are safer because they roll slower and have the option of a speed reducer. They also keep you further to the side of the road and out of traffic. They are also ideal for building upper body strength and endurance, which is the primary focus when starting to rollerski.